I spent a lot of time in Emacs so I’m always looking for something new to add to my workflow. I typically start applications using xstarter, a command line tool written in C that uses an ncurses interface. It allows me to quickly search an open programs I need. One of its useful features is recording applications that were recently opened and showing them on the screen so that they can be accessed quickly. Most of the time, I use it via xmonad window manager where it’s configured to launch with a key shortcut. 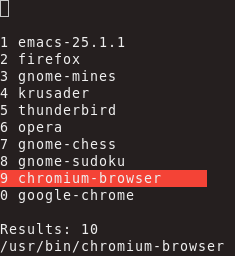 However, I also wanted to have access to that tool via Emacs so that I can use it even if I’m not running xmonad. I wrote a small Emacs Lisp package that offers an interface for xstarter. It uses Helm, a great framework for building convenient search interfaces that many Emacs users are familiar with.

In order to make it work, I had to add two additional features to xstarter itself. Firstly, it needs to return a list of applications it has stored in cache. It’s printed to the standard output; in order to get it, the Lisp package simply runs xstarter -P as a shell command and collects the output as a string. Secondly, I’ve added xstarter -e option which can launch any application in a separate process (so if it’s run from a terminal, it’s detached from it). The ELisp package uses that command to launch an application selected by a user in the Emacs interface:

It’s surprisingly short at just over 20 lines of code!